Away Fans Guide- Charlton, The Valley 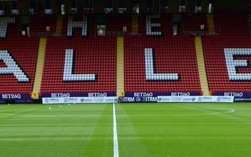 An away fans guide to The Valley, Charlton Athletic. Thanks to Holden Chinaski from the Not606 forum

An away fans guide to The Valley, Charlton Athletic. Thanks to Holden Chinaski from the Not606 forum.

Which pubs would you recommend to our fans to use during our visit to The Valley?
Personally, if you get there early, I’d go to Greenwich. The Meantime Brewery has a bar; brewed on site and it’s a delicious beer especially the London Pale Ale. Anywhere in Greenwich by the Cutty Sark is not bad, you have the Admiral Hardy, Spanish Galleon, Gypsy Moth, The Ship or bit further out The Cutty Sark. It’s just that far away from The Valley that you don’t get rowdy fans and served relatively quickly.

Which pubs would you suggest we avoid for the duration of our visit?
That pub opposite the train station, The Antigallican (or whatever the **** it’s called). Its crap, and just horrible, they serve beer in a plastic cup and plastic bottles. Its shabby and classless. Then again, I am quite snobbish on occasions.

What food do you serve at your ground? What is it like?
All sorts, burgers, hot dogs, pies, sausage rolls. They had some bits where they serve continental food but was not that popular. Would warn you though it’s pricey and not that brilliant.

What is your ground like?
Empty. No joke used to be full, lively with an amazing loud atmosphere, however recent times we’ve seen a mass exodus of fans refusing to fund our owners. It’s become very hostile place in my opinion.

Is the ground easy to find?
Yes, like most places in London, sign posted and literally a 2 minute walk from Charlton train station

Any suggestions of where the away fans can park?
Avoid the Greenwich side and the retail park. Parking is expensive or you have a 2 hour parking limit. I usually park around Marion Park near Woolwich Dockyard station. It’s a 10 minute walk (I do it in less), and it’s far less crowded, always get a parking space and never in my decades of going to Charlton experienced trouble for fans, both Home and Away, going there. In fact, quite the opposite, had a few friendly and pleasant chats with them.

What do you expect from Charlton this season?
Mid-Table mediocrity. We’ll start off well, get about three injuries and the paper thin squad that we have will be exposed and we won’t win a game in a hell of a long time, Robinson will be sacked, we get some other unknown European entity or out of work manager and just about avoid relegation (like most of our other seasons).

If you could have one Rovers player who would it be?
I’ll get back to you on that one. Not too overly familiar with.

Who do you think will win the league and who do you think the dark horses could be?
Portsmouth, I’ve put my money on them winning the league. Off the back of a good season last, think that they’ll continue it on. Ultimately like us, they want to be in the Championship.
The Dark Horse, I’m going to go with either AFC Wimbledon or Southend United. Southend more so as they an excellent season by their standards the one gone. AFC Wimbledon started off well but then tailed off towards the end. Another season more wiser, I think that they could potentially carry on the momentum.

Any key players missing for Saturday?
Mark Marshall – Injured pre-season, but then again, is a new signing so not sure if he’s a key player as of yet

Charlton Railway Station is basically on the door step of The Valley as it is located less than 200 metres from the ground. The station is served by Southeastern trains with direct service to central London (Charing Cross, Waterloo East, London Bridge) and North Kent (Dartford).

From Delafield Road briefly turn right onto Charlton Church Lane follow by a sharp left to Floyd Road. Follow this to the end and you are now at The Valley.

The closest tube station is North Greenwich located on the Jubilee Line (Silver) with the resulting distance of 2.1 miles likely to take just over 40 minutes by foot. Outside the tube stop you are essentially at the 02 Arena (Millenium Dome) so catching a bus is a straight forward matter (see below).

As Charlton is essentially in London the network of buses which pass the stadium is quite vast with the the club recommending the following routes:

The Valley`s stadium address for satnav is as follows:


TICKETS
All tickets are situated in the Jimmy Seed Stand