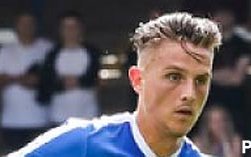 Bristol Rovers let a 1-0 lead slip away and ended the game on the losing side.

Both Chelsea lads Clarke-Salter and Colkett both were handed starts with Rory Gaffney starting up front along side top scorer Matty Taylor.

Rovers had the best of the first half with Matty Taylor seeing a shot deflected wide, Charlie Colkett saw a shot well saved whilst striker Gaffney shot too close to the keeper. Roos saved well from a 25 yard drive in the first half.

In the second half Rovers took the lead when Matty Taylor hit his 11th goal of the season from the penalty spot after Shaquille Coulthirst fouled Dan Leadbitter. It looked as if Rovers was going to go on win the game easily, but on 62 minutes Kelle Roos spilled a shot and Coulthirst was on hand to fire home. Rovers continued to press to get all three points were dealt a sucker punch deep into injury time when Tom Nichols found himself free from 8 yards out and fired home to grab all three points.

Rovers slipped to 8th in League One but have a chance to move back into the play off spots when they take on Fleetwood on Tuesday night at The Memorial Stadium.